2018 PROGRAM
Locations
Performers
Program
Program Notes
maslanka-arise-2018
David Maslanka, Arise! (1987)
Arise! By David Maslanka (1943–2017) is a short essay on B-natural versus B-flat, with B-natural ultimately winning the struggle. The first notes of the piece set the stage this conflict through the horn and trombone pitches: the horn has a concert B-flat against the trombone’s F-sharp, which resolves to a B-major chord: 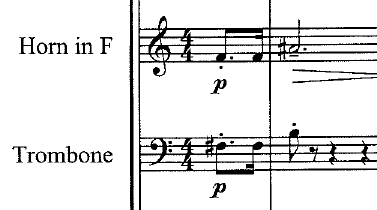 The rest of the introduction is unambiguously a simple B-major chord progression.
Compositionally, the entire piece is a general arch form: A–B–C–B'–A', presented thusly:

Following the B-major introduction, a few short rhythmic-melodic themes are presented. A counter proposal in B-flat is made, featuring a melodic interval of the minor sixth, but the exposition ends in B-major.

​The development passes through a number of keys and returns to B, only to be thwarted by an abrupt shift to an F-centered tonality. The shift in key is accompanied by a shift to a compound meter, adding a further diversion. This F area is the dominant of B-flat, and after a quasi-false recapitulation, the original themes do return but with strong harmonic characteristics of B-flat and E-flat simultaneously. As if sensing the trouble, the horn calls out prominent F-sharp to B-natural figures amid the frenzy, ultimately leading to a full break and grand pause, after which all instruments return to the tranquil B-natural center and thematic materials of the introduction, bringing the work to its conclusion.

​Other harmonic/melodic properties used throughout the piece include numerous minor seconds, which reinforce the B vs. B-flat feeling, and a fair amount of tritones, which plays to the F-B relationship.

​The rhythmic/melodic motifs of the piece have a strong onomatopoeic relationship to the work’s title, i.e., short note (sometimes notes) followed by a longer note, with the emphasis on the long note, as though speaking “arise:”
As remarked by the composer in his preface to the score, the piece has characteristics of the Baroque-era fortspinnung (spinning forth) compositional technique, whereby motion is imbued through the constant repetition and development of small figures. The general forward motion of the piece is interrupted only twice: once by the grand pause near the end, which serves as a general reset before the re-establishment of B-major for the conclusion; and earlier in the piece at the end of the development section. There, the texture breaks down into a stuttering, pointillistic interchange of isolated notes among all five voices, as though the instruments are now confused about their position and momentum, unsure if B-natural is the right place to be (is B-flat the tonic, or is B-flat really A-sharp in disguise and the leading tone to B?), and are saved only by the abrupt F-major retransition that restores their direction, but not yet the right key. 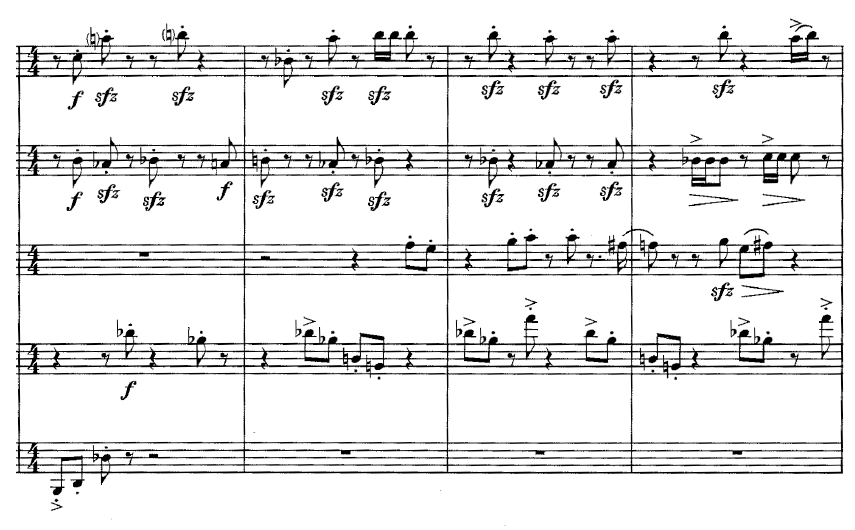